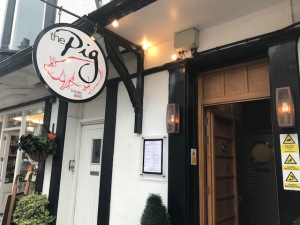 Looking for somewhere to get fed in the Lake District, The Pig’s online menu said all the right things.

We hopped in the car and found a place to park in Windermere’s picturesque and very narrow town centre streets, just a short walk from The Pig.

Walking through the door, it quickly became apparent that this is more like a pub that serves food rather than an out-and-out restaurant. And that’s just fine, as there was a laid-back atmosphere and even a smattering of dogs lazing about under their owners’ seats.

For starters, we shared the battered halloumi cheese fingers, and hella good they were too.

I was drawn to the South African Bobotie main – lamb mince with raisins and apricots – but it was the gourmet hot dog that really had me drooling when I’d read the online menu earlier. So when the hot dog wasn’t actually on the menu, I was a little gutted.

So the beef burger it was, on what Scots would call a ‘crispy’ roll. Not what I’d normally want for a burger bun, however it worked pretty well. Chips that were chunky enough to use as a weapon made this a more than filling main course.

For Mrs G, it was a delicious main of traditional fish and chips that also put paid to any thoughts of dessert.

A nice choice of draft beers kept me occupied, and I did consider attempting the orgasmic-sounding warm Toblerone fondue. But at £13, we’d have been lucky to manage £2 worth between us as we were so stuffed.

The staff were top class and helped make this a very enjoyable dining experience in one of England’s most beautiful towns.

Get stuffed at The Pig, you greedy swines. 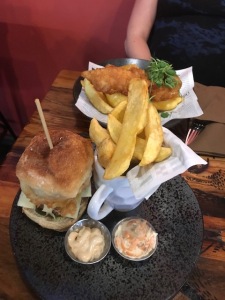