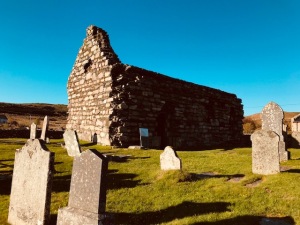 A decrepit old church in the middle of nowhere – who the fuck wants to see that?

I ain’t no fan of religion or graveyards at the best of times, but something about what I’d read on this 13th century church drew me to drive for almost an hour along the countriest of country roads.

I was in Lochgilphead overnight and had some time on my hands after a day’s work. With unfamiliar glorious sunshine making Scotland seem very unlike itself, I jumped in the car and headed west through rural Argyll and Bute to the tiny hamlet of Kilmory to check this place out.

There wasn’t another car on the road for most of the drive and I passed some gorgeous scenery, not least the lovely canal-side village of Cairnbaan and the eerily beautiful ruins of Castle Sween. I also passed countless sheep families with their brand new lambs frolicking in the sun. Most scarpered off when I slowed down for a look, but some posed dutifully for pictures. Mon the sheep!

Approaching Kilmory, the chapel can be seen nestling among some picturesque farmhouses – where people still live and farm, presumably used to infrequent visitors to their historic neighbour. Infrequent because the road to the chapel makes it unlikely to be visited by too many tourists.

Parking at the side of the single track road, I had to gently walk past some big-ass, black cows that stared at me tensely until I got too close and they moved along. A sign points the way between the farmhouses to the chapel, which sits in an ancient graveyard and is surrounded by a stone wall with an iron fence. A sign on the fence asks visitors to ensure it stays closes, presumably to stop those cows damaging the tombstones.

Looking at it, you’d think the chapel was closed. But the gate opens and a further sign on the chapel door asks visitors to use the key, which is attached to a chain hanging from the door. That right there is some charming shit, and not something you’re likely to see anywhere else.

Inside, a glass roof protects around 40 ancient gravestones and fragments of gravestones from the elements. Rather than leave it to fall apart or refurbish it with a tasteless renovation, the local council has instead fitted the glass roof. A quite brilliant idea.

Information boards explain the history of the stones, the most impressive of which is MacMillan’s Cross – carved for the 15th century keeper of Castle Sween. It shows the crucifixion, with the Virgin Mary and St John in attendance.

The atmosphere in the chapel is quite special, particularly as I didn’t see another living soul anywhere for miles. The isolation (even though there were presumably people in at least some of the farmhouses) adds to the sense of wonder.

This is one of those places you will likely never visit. But should you find yourself anywhere in the region of Lochgilphead, you really ought to make the effort.