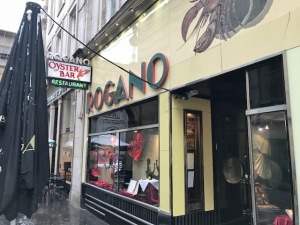 Despite having walked past it thousands of times, I’d never been through the doors of the Rogano until now.

Proudly boasting a 1930s decor based on the interior of the Glasgow-built Queen Mary ocean-liner, the Rogano is apparently the city’s “oldest surviving restaurant.”

Set on an enviable location between Buchanan Street and Royal Exchange Square, the funky neon sign catches the eye of everyone who walks by. We had booked a table for four in the downstairs Cafe area and were taken in out of a sudden and heavy snowfall.

The place looks cool and definitely is one of a kind, certainly in Glasgow anyway. With its sea-going theme, the Rogano sets out its stall in no uncertain terms. This is a joint for folk who like seafood…and unfortunately, I really don’t.

But as the only one in a party of four not into the delights of the sea, I could hardly protest too loudly, especially not as Mrs Gangsta and I were being treated to our meal.

For starters, all four of us went for the soup of the day, a fantastic Scotch broth with lovely bread and butter.

As we looked at the mains menu, our friendly waiter told us about the special – a sea bass on a bed of broth vegetables. Two of our party went for that, while Mrs G opted for the Rogano fish pie. Not being a big seafood guy, I could have gone for steak or chicken, both of which I’m sure would have been great. But trying to stick to the theme, I chose fish and chips – pretty much the only way I ever eat fish.

For drinks, we chose a French Vin De Pays D’OC Pinot Noir. And a damn fine bottle of wine it was too for just £25.

My beer battered North Atlantic cod was excellent and certainly right up there with the best fish and chips I’d ever tasted. The sea bass won top marks all round and Mrs G made short work of the fish pie.

Three of us kept room for a dessert, with creme brulee, sticky toffee pudding and dark chocolate & almond torte making the cut. My creme brulee was delicious, and I didn’t hear any complaints from the others either. Flat white coffees for two also went down well.

The total bill came in at under £80, which was a surprise and also potentially a problem as we were paying with a £100 gift voucher. As it turns out, not a problem at all. Our waiter brought us change from the voucher, which I’m certain is not something that would happen in too many other restaurants.

Having finally sampled one of Glasgow’s culinary institutions, I can confirm the Rogano is well worth checking out. It’s quaint, comfy and welcoming – and the grub is top notch. Even for a seafood-fearing meat eater like me.