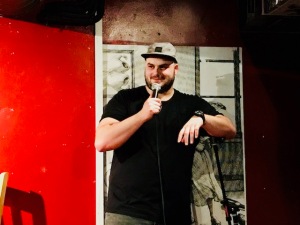 Listening to his weekly General Banter podcasts, you might pick up that Colin Geddis isn’t really all that into stand-up.

Or at the very least, he finds the process of writing material for a stand-up comedy show to be tiresome. And that’s surprising, because he’s clearly really fucking good at it.

The Northern Irishman is arguably most famous for his Gedzilla YouTube channel and a range of brilliant characters including deluded cagefighter Barry ‘The Blender’ Henderson, Barry’s outrageously proud gay brother Garrii and smart-arsed hipster Besty McD. He’s mastered the short video format and is among the very best when it comes to getting laughs on YouTube.

His General Banter podcasts are probably the closest thing to his stand-up routine by virtue of the fact there are none of those characters present ─ it’s just the real Geddis (sometimes with great guests including fellow comics such as Micky Bartlett and Aaron McCann, as well as his long-suffering girlfriend) mercilessly ripping the pish out of whatever has caught his eye in the news that week.

And it’s on those podcast assaults that he often bemoans the Edinburgh Fringe as too much work for not enough reward or describes writing stand-up material as a chore.

Thankfully for us then, he booked himself a headlining stand-up show at the Ulster Hall in Belfast on December 16 and needed somewhere to road-test his new material. With the gig in the cramped Blackfriars basement selling out almost immediately, he announced a last-minute second show on the same night, kicking off right after the first one ended.

Despite a smaller crowd for the second show, Geddis isn’t fazed and is on fire right from the start. He interacts superbly with the audience without ever getting into the mode of onstage bully ─ and you know he’s clever enough to reduce anyone he chooses to tears. He’d rather get his laughs the right way and he’s very much loving the reaction he’s getting in Glasgow.

There are no awkward silences, no missed punchlines and no apologies for sometimes sailing very close to the wind in terms of decency and political correctness. Fantastic observations about everyone’s favourite punch bag Donald Trump are finished off with Geddis saying that if he weren’t President, you’d probably consider Trump to be “good craic.”

A bit about breaking his finger and subsequently seeing a side of his father he’d rather not have seen brings as many howls of objection as it does laughter, and Geddis laps it up. If this is a guy who isn’t that keen on stand-up, we can only imagine what he’d be capable of if he could actually be arsed!

The Belfast show is already sold out and maybe that adoration will ensure he keeps polishing this side of his enviable skillset. 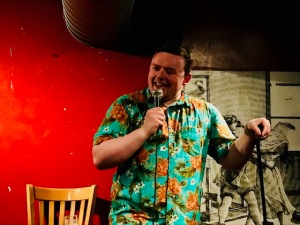 A word about opener Aaron McCann, an infrequent guest on the General Banter podcast and a rising star of the Northern Irish comedy scene. He takes the stage clearly still buzzing from the first set just an hour or so earlier.

McCann is superb at audience interaction, building various tales around largely incoherent shouts from the crowd. One particular audience member develops an efficiently annoying habit of shouting at the very second McCann is about to deliver a punchline, but he keeps his cool and still brings home the laughs. His riffing on Isis, proposing a special ops hen party to deal with the terrorist threat, is remarkably funny and his fragrant use of the c-word ensures the notoriously sweary Glasgow public is onside right from the start.